Access to nature is a central consideration in Hackney Council’s Roadmap to Net Zero, as the council boosts green spaces for less wealthy residents. 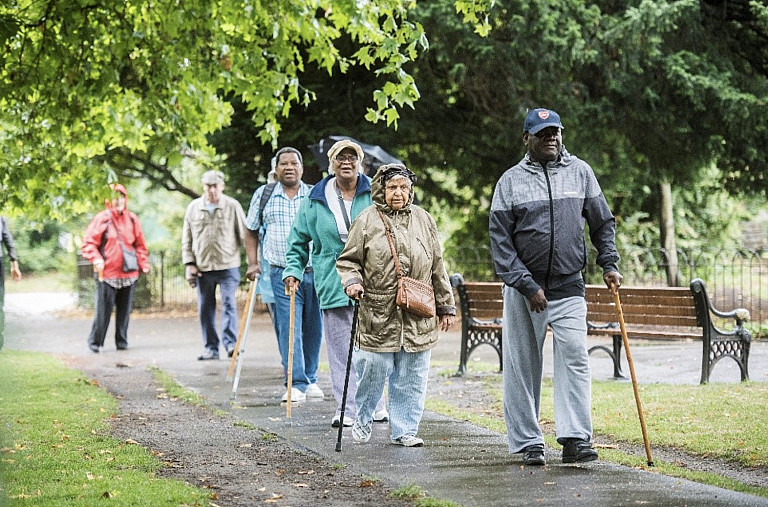 In urban areas nature-rich green spaces help to draw down carbon pollution from the atmosphere as well as contributing to people’s wellbeing. Yet in many areas, green space is being lost and access to green space varies considerably.

Access to nature is also an issue of racial justice. Friends of the Earth research found that people of Black, Asian or Minority Ethnic background are twice as likely as white people to live in areas of England that are most deprived of green space.

In Hackney, about three quarters of residents do not have access to a private garden – making access to public green spaces even more important. Hackney Council is now building on efforts over more than a decade to make green spaces available to everyone, regardless of background, particularly the many Hackney residents who live in rented accommodation and on estates. Hackney’s 283 hectares of green spaces includes 58 parks – of which 27 are Green Flag awarded (an accreditation that recognises well-managed green spaces) – and provides roughly 15m2 of green space per resident.

However, with some neighbourhoods still deprived of green space access the council recognised that there’s still work to do.

From the introduction of street trees, parklets and green corridors to major park restoration projects or the creation of entirely new open spaces, access to nature is now a central consideration in the council’s Roadmap to Net Zero, and also the subject of a new strategy.

The council’s Parks and Green Spaces Strategy 2021-2031 was adopted in May 2021, following a community consultation with focus groups and over 50 meetings. Based on what residents told the council, it sets out how Hackney will continue to improve its parks and green spaces. over the coming decade. Its 30 commitments include:

The council has also made a separate commitment to plant over 5,000 new street trees between 2018 and the end of 2022, and over 30,000 new trees and saplings in Hackney’s parks and open spaces.

The coronavirus pandemic has seen park usage rise significantly, evidencing the vital role parks play for people across the country. In some cases, there has been a strain on popular green spaces – further evidence that green space must be prioritised and protected and proving the need for extra green space provision.

Councils must take care to avoid ‘green gentrification’ – unintended demographic changes that can occur when improvements to green space make a neighbourhood more desirable to live in, inflating property prices and driving away original residents. Working in collaboration with residents and heeding their concerns can help remedy this.

Improving parks for people should include helping nature to thrive. Hackney has made a start by creating areas of longer grass and dead wood in parks to recreate natural habitats. Hackney’s Local Nature Recovery Plan will support the parks team’s ambition to do more on biodiversity.

Hackney isn’t only focusing its greening efforts on parks. Creative interventions like parklets, green roofs and street-level planters blend nature with the urban environment in residential areas. For example, the council has committed to planting 5,000 new trees on streets by 2022. Residents can experience greenery on their doorstep, not just in conventional spaces such as parks.

There is a compelling financial case for preserving green spaces and increasing access. In London alone, better physical health tied to green spaces could save £580m a year, with a further £370m saved by contributing to better mental health.

Unlike Hackney, many councils have felt forced to cut their parks and green spaces teams, but it is the retainment of a dedicated team that has enabled Hackney to draw in the resources needed to scale-up its work. For local authorities without a special team, volunteers are a useful way of multiplying human resources with huge payback.

Hackney’s focus on improving green spaces has a series of success stories and has been well received by residents. 96% of people surveyed by the council said they liked or loved Hackney’s parks and green spaces – this is a popular policy area in which the council has a positive reputation.

In 2011, the authority invested £8.9m in the restoration of Clissold Park which is now well used and valued by local people.

In 2019, Daubeney Fields play area reopened after major improvements. The once underused park saw an increase in visits from 27,000 between July and December 2018 to 43,000 for the same period in 2019.

In 2021, Springfield Park opened after a restoration costing more than £3m. Across Springfield Park and Daubeney Fields 101 Japanese cherry trees were planted, part of an overall gift of 6,500 trees donated to the UK by Japan.

Wider benefits of greening outside of parks:

As a result of the 10x Greener project, there is a greener route for pedestrians and cyclists between Daubeney Fields and Hackney Marshes. There were social benefits too as people interacted with their neighbours – especially families and children, because the local primary school was strongly involved.
Read more
Share this initiative
Inspired? Find out more