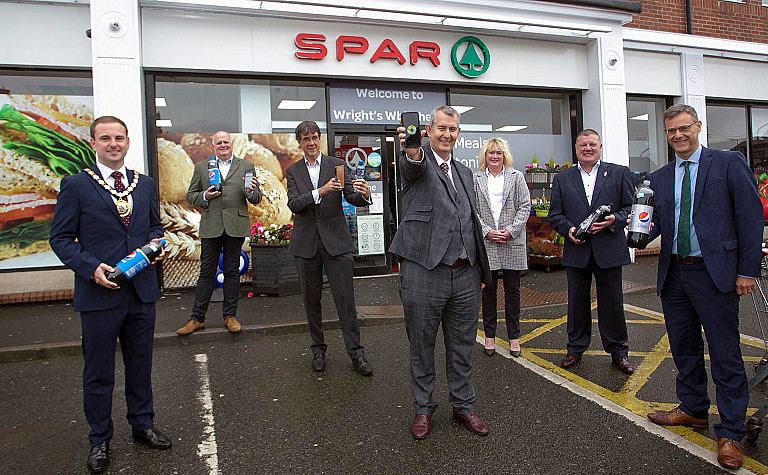 Reward4Waste is a digital deposit return scheme (DRS) developed by Cryptocycle (with local company Relative in Portadown), for single-use recyclables to incentivise consumers to recycle through an app-based system. Compared to other deposit return schemes, which rely on complex reverse vending machines (RVM), this is a very cost-effective system, offering reverse vending machine functionality on the user's phone.

The trial objective was to provide a proof of concept for Reward4Waste. The trial was run in collaboration with Bryson Recycling and Mid and East Antrim Borough Council, with proud support from Britvic Ireland, PepsiCo and Encirc in Whitehead, Co. Antrim, a self-contained town, inviting 2,000 households to participate. In scope items had unique stickers and could be purchased from one local retailer, SPAR. The scheme involved kerbside recycling (weekly collections) and four out of home (OOH) bins in litter hotspots. In scope items were plastic drinks bottles, including soft drinks and HDPE milk, drinks cans, and glass.

Residents downloaded the app for iOS or android, and scanned the unique code on their recycling box or out of home bins and drinks containers to register a recycle. No levy was placed on participating items, only a reward. The trial ran for four months from September 30th 2020 to January 31st 2021.

Extensive communications were designed, comprising a bespoke web page, a social media campaign, banners and posters including real Whitehead residents, and a PR campaign with DAERA Minister Poots launching the trial. There was also a door-to-door campaign to reach participants, and a delivery of information packs inviting residents to take part, and a support help desk set up to help with enquiries.

How it works
Householders download the Reward4Waste app, scan their household recycling kerbside box's unique tag and also the packaging to be recycled. This results in receiving a reward for stickered items.
During normal kerbside collections, Bryson Recycling scans the tagged kerbside boxes and the items inside will be recycled accordingly.

The results indicated that 480 tonnes of carbon was prevented from being emitted from the production of new products (estimated it produces 2 tonnes of carbon emission for every 1 tonnes of product, according to calculations from StopWaste). This figure is for the 2,000 households (average 2.7 family members) recycling over a 5 month period.

With the planned introduction of the new Deposit Return Scheme (DRS) in late 2024 in Northern Ireland, councils will be tasked with researching and implementing a DRS system which is practical, deliverable and value for our ratepayers.

Queens University Belfast (QUB) undertook surveys and held focus group sessions between Sept 2020 – April 2021 with citizens in Northern Ireland, who were recruited through email, leaflets and social media. The objective of the research was to understand consumer attitudes and motivations towards DRS, Digital DRS, Reward4Waste, and the Reward4Waste trial.

Findings from the above three research areas are as follows: 13 – 80 year olds took part in the trial; 85% of people find it easy to recycle at home; 70% of people would prefer to recycle at home; 86% of people would be resistant to using a conventional (RVM) DRS; only 5% would prefer to use a conventional (RVM) DRS; research has shown a significant preference to a digital DRS; 87% say they would like DRS to extend to all types of plastic waste; 21p is the level of deposit that would incentivise the use of a digital DRS vs. 30p for a conventional RVM DRS model; and the majority found the Reward4Waste app easy or very easy to download and use.

Any intervention to improve recycling behaviour should take cognisance of opportunities for consumers to recycle with ease and convenience. If a sole digital DRS is advanced, then, in the interests of inclusivity, consideration should be given to the relatively small number of people who do not have a smartphone. For a larger trial, a more robust method of putting unique coding on products is recommended, such as at point of manufacture.

Survey participants believe Reward4Waste brings a more inclusive solution. With Statista research forecasting a 93.4% smart phone user penetration in the UK, and their home scan option – they believe they can deliver full coverage. Consumers are tech savvy and we believe Reward4Waste will become part of people's habitual behaviour due to its convenience. Some survey participants raised the discriminatory factors of a conventional DRS regards poor mobility, access to a car, and lack of storage space. It was identified that a conventional model would mean people could not get their deposits back easily or immediately. This may result in more drinks containers going into landfill.

Number of people engaged in the pilot.
Age range of residents engaged in the pilot.
Number of residents who downloaded the information.
Number of people who suggested, when surveyed, that they would opt for a digital deposit return scheme using their existing kerbside recycling collection, as opposed to a conventional Reverse Vending Machine (RVM) model.
Number of drinks containers recycled.
Read more
Share this initiative
Inspired? Find out more