by Forest of Bowland AONB

Peatland (or 'blanket bog' as the habitat is known in the uplands) is of international importance for its biodiversity and also its carbon storage. Whilst peatlands only cover 3% of the world's land area, they contain nearly 30% of all carbon stored on land.

A healthy, functioning blanket bog is extremely important in providing various ecosystem or natural services for society, which include: reducing carbon loss and promoting sequestration of atmospheric carbon; reductions in downstream flood risk and siltation; reduction in wildfire risk on moorlands; improvements in water quality; biodiversity improvements; and improvements in landscape quality and natural beauty.

Around a similar time, Lancashire County Council, Forest of Bowland AONB and the Environment Agency worked together to establish the Lancashire Peat Partnership to help co-ordinate efforts to gather data and evidence on Lancashire's peatland and also to secure additional funds to support delivery of restoration on the ground.

In 2013, the Lancashire Peat Partnership commissioned a series of 'Priority Peat' reports to collate data and evidence on peatland condition and opportunities for restoration across the County. Since then, these reports have helped to unlock funding from a range of public, private and charitable funding sources to support delivery of peatland restoration.

Restoration work includes re-profiling of gullies and peat hag edges, construction of many timber, coir and stone dams designed to slow the flow of water, along with path improvements and revegetation with heather brash, sphagnum mosses and cotton grass plugs. This specialist work involves expert contractors who access the fells generally between September and March. Working in such exposed locations during the autumn and winter months can be very challenging and the conditions often hostile.

Just over a decade later from initiating the planning and partnership work, the Forest of Bowland AONB Partnership has helped secure £2.5m investment and managed the restoration of 755 hectares of peatland habitat (an area equivalent to 1000 football pitches) across 18 different sites.

'Bowland Priority Peat' is not resting on its laurels with these achievements, however. Efforts continue to improve data and evidence and to secure further funds to carry on this work through the 2020s. Lancashire County Council has recently committed to a new 'Environment and Climate' programme, supporting a dedicated Peatland Development Officer for Lancashire to help drive forward this work within the County and also linking up with other peatland initiatives across the UK.

We initially talked to established peatland restoration initiatives, such as Moors for the Future, Yorkshire Peat Partnership and North Pennines AONB Partnership. These meetings and discussions provided us with loads of inspiration and insight into what was involved in developing a similar initiative in Forest of Bowland.

The IUCN UK Peatland Programme has helped us in networking with practitioners, academics and other peatland experts as we have developed the initiative. Attending their annual conferences from 2010 onwards has been invaluable.

Most areas of upland in peat in the Forest of Bowland (and wider Lancashire) is privately owned, so developing trusted relationships with landowners and land managers in the area has been absolutely critical. Developing these relationships takes time and effort and should not be underestimated.

Developing an understanding of the funding 'landscape' has also been vital. This includes both public and the future potential for private investment, including via the Peatland Code (similar to the Woodland Carbon Code).

Coir dams to slow the flow of water. 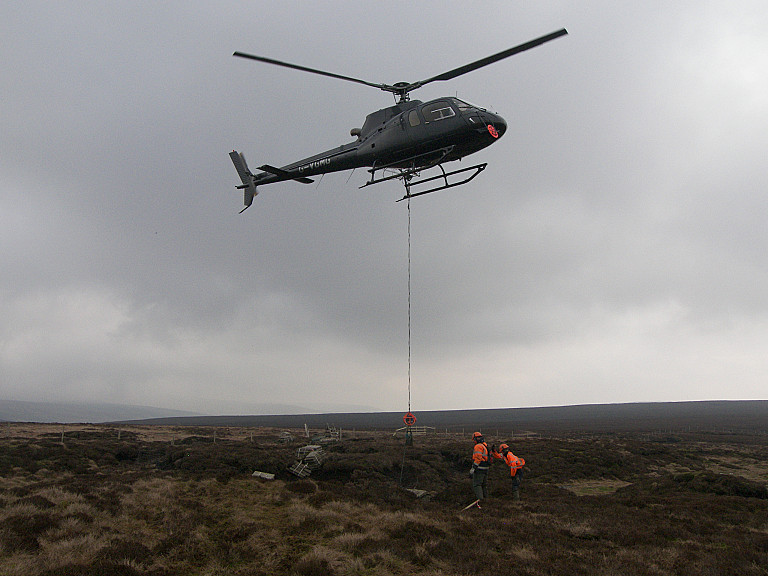 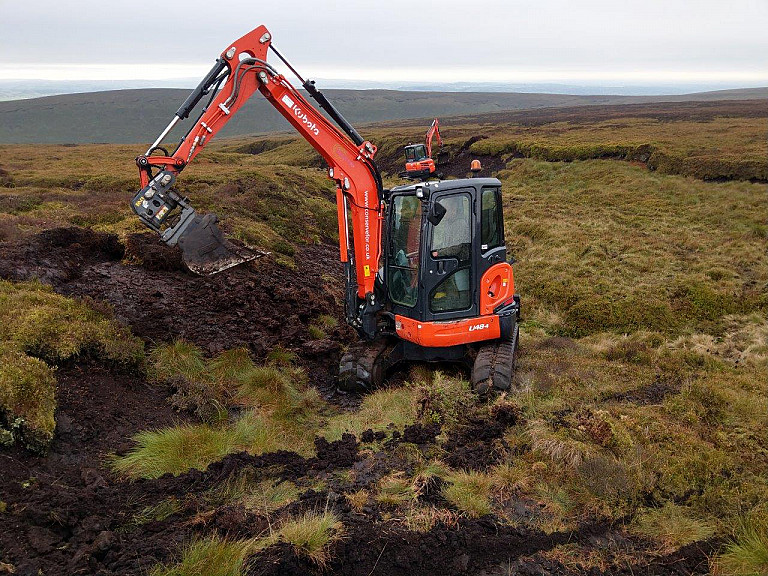