We can't continue to use natural gas to fuel our homes and businesses, as the carbon emissions are too great, but we rely on having a gaseous energy vector when we need it for home heating, power generation and industrial use. In the winter, gas use can be 3.5 times higher than electricity use, which means that it is vital for us to be able to store energy as a gas over the summer and deploy it when demand soars in the winter. We can't control when the wind blows or the sun shines, but we can use excess renewable energy to create hydrogen through electrolysis, storing it in vast salt caverns for later use. We know that hydrogen is essential to reach net zero, and re-purposing our gas networks to hydrogen will allow us to transport the hydrogen to where it is needed.

Cadent are working with Northern Gas Networks and National Grid on East Coast Hydrogen, a 15-year programme to transition the natural gas network to hydrogen in the East Midlands and North East.

By the end of the programme, which is currently at feasibility stage, low carbon hydrogen produced in the Humber region will reach up to 1.47 million homes and 28,000 large gas users in the East Midlands Region, as well reaching Northern Gas Network's customer in the North East. Hydrogen will fuel heavy industrial equipment such as kilns and refineries, heavy transport such as trains and HGVs , and will also be used to heat our homes and cook with. When renewable generation is low, hydrogen stored in the gas networks and salt caverns will be used to generate electricity too.

Cadent are collaborating with Northern Gas Networks and National grid on the East Coast Hydrogen Programme, which is currently in its feasibility stage. The programme has aimed to pull in as many organisations as possible that are involved in the whole hydrogen supply chain - the hydrogen producers, equipment manufacturers and end users and have found that this has generated significant momentum, with all parties working towards a common goal.

Cadent have started talking to some of the Lincolnshire local authorities that are home to large industrial users - by working collaboratively, it has been possible to accelerate relationship-building and planning between the gas networks and the end users,

For the next stage of the programme, the detailed engineering design, Cadent need to make sure that their pipeline routing work takes into account the needs of heavy gas users in the region. They are keen to hear from organisations in the East Midlands Region, particularly large gas users, that are interested in fuel switching to hydrogen. They have advice to offer on how to access funding for Industrial Fuel Switching Research and Development. This will also help to make sure that when the network is designed.

Putting the customer at the heart of initiative is one of the fundamental criteria that will make the East Coast Hydrogen Programme, and other de-carbonisation initiatives, a success. 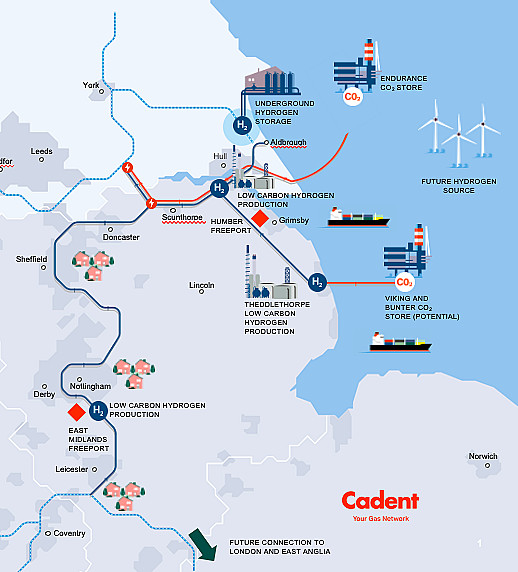